On February 19th BlackBerry finally released an OS update for their existing in market phones, making OS 10.3.1 available to customers beyond those using the BlackBerry Passport. A few carriers (such as Verizon) are still dragging their heals, but the new OS is now an option for most. Traditionally BlackBerry 10 users have been very quick to adopt new OS versions, and initial results show that 10.3.1 is no different.

First a disclaimer. The following data is presented on a per day basis, making the sample sizes relatively small. In an attempt to make the sample sizes as large as possible data from across different apps have been merged together into a single data set, which itself can have an effect on the data. As a result the data is a bit more messy than the monthly averages I typically post. Even over this short period of time the update of 10.3.1 is very noticeable. In the six days before the 19th only 11.2% of users were running the newest OS, while that number jumped up 62.6% in the six days following the 19th.

This data was collected by BlackBerry World for downloads of all Ebscer apps that support BlackBerry 10. Data shown on the chart is from the February 13th, 2015 through February 25th, 2015. The app for the Buffalo Metro Rail has been updated for both Android and BlackBerry. This update fixes a date related bug, and also resizes the map for BlackBerry Z10 users. The Head Words game has been updated to version 1.1 in BlackBerry World. This updated adds Bible, Celebrities, and Singers as three brand new categories in the app. Additionally, the app now prevents the screen from timing out while a game is in progress.

Head Words is a multi-player guessing game similar to Celebrity, Hedbanz, and Heads Up. After selecting a category, one player places the phone on their forehead while the other players give clues. With one minute to guess as many words as possible, the player can tilt the phone down for each correct answer, or tilt the phone up to pass. At the end of round a word list will show what was guessed right and wrong. The swipe down menu provides an option to turn the sound on or off. By default the Slider control that Microsoft provides for Windows Phone Silverlight applications is missing some key properties such as the IsSnapToTickEnabled property. However this can be recreated in code to give Windows Phone apps the same functionality. 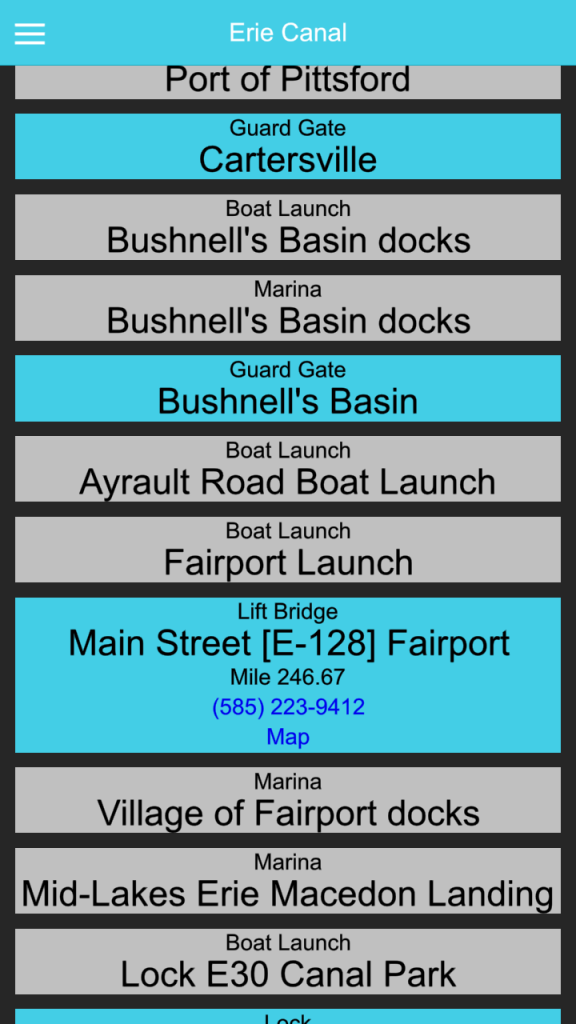 Apps for the New York State Canals have been updated for both BlackBerry and Android users. These apps give you the ability to see the locations of all locks and boat launches along the Erie Canal, Cayuga-Seneca Canal, Oswego Canal, and Champlain Canal. Additionally the apps also contain a map view to give a visual representation to where everything is. The most recent update accommodates the new data that is being supplied by New York State, and also adds a link from the landmarks directly back to their respective locations on the map.

The free Stuff I Need checklist app has been updated for Android, BlackBerry, and Windows Phone. This new version adds a few new features, including an improvement to the responsiveness of the pull down tab on both Windows 8.1 and BlackBerry 10. The Android version of the app received improvements to the text input fields, where they now automatically use sentence case capitalization and automatically submit when the return key is entered. Additionally, the sorting was improved so that it is no longer case-sensitive.

The BlackBerry 10 build of the app improves the use list switcher (especially on the Z30, Classic, and Passport phones), streamlines the app, and also makes an additional backup of some settings to the users BlackBerryID.

Windows Phone users will see the biggest changes, as the app has been modified to become compatible with the action center added in Windows Phone 8.1. Additionally, the app now includes an option allowing users to pick alternative font sizes and makes it easier to select existing items.

With BlackBerry still not releasing 10.3 for their older phones, the landscape for in market devices is mostly unchanged from last month. There are roughly 10% of users currently running the newest OS, with the vast majority of users two OS versions behind. This data was collected by BlackBerry World for downloads of the free strategy game Pixelated and the free checklist app Stuff I Need. Data shown on the chart is from the beginning of January 2014 through the end of January 2015.

Below is screen shot of an app acceptance email I received from Amazon. In addition to the many Kindle devices, and the lone “Non-Amazon Android” device, you will find the BlackBerry Classic and the BlackBerry Passport. With the Amazon appstore now preloaded on newer BlackBerry phones, Amazon now appears to explicitly be checking submitted Android apps on these phones. Given the unique screen ratios on these phones, and the fact that they are outselling most of the other devices on this list, it is nice to see Amazon explicitly checking for compatibility. This should free BlackBerry users from having to wonder if anything they download from Amazon will work on their phones. Xploding Boxes has been updated to version 5.2 with ten additional levels. This brings the total number of levels in the game up to 480.

January showed virtually no change in the distribution of OS version used by BBOS users from the previous few months. With 55.6% of users running OS 7 there is only a slight increase from the 48.7% that were running OS 7 in January 2014.

Also somewhat inexplicably, the number of users running OS 4.x has not dropped to zero. The percentage of users has been stuck at around 1% for two years now, but should really be at absolute zero by this point. I first wrote about 4.x being dead three years ago, and am baffled that anybody is holding on. (And to be perfectly honest, it is past due for all BBOS users to upgrade to BlackBerry 10). This data was collected by BlackBerry World for downloads of the free BlackBerry strategy game Pixelated. Data shown on the chart is from the beginning of January 2014 through the end of January 2015, and does not include BlackBerry 10 or PlayBook devices.

Pixelated Shapes has been updated to version 1.4 in BlackBerry World, Google Play, the Amazon App Store, and the Windows 8 App Store. This new version reduces the minimum width required on Windows 8, improves the back up options on BlackBerry 10, and supports the newest version of Google Play on Android.

Pixelated Shapes is a twist on the classic version of Pixelated that replaces the familiar squares with triangles and hexagons. The object of the game is to get the screen a single color by slowly growing a blob out of the upper left hand corner by matching it to the colors of the surrounding shapes. This is done repeatedly until either the game is won, or you run out of moves. Under the default settings you must clear the screen in 29 moves or less in order to win. A one time in-app upgrade can allow you to adjust the difficult, switch color schemes, change to different game modes, and get an indicator giving you the number of remaining moves. To be fair, I also wrote a fairly popular article on Medium titled BlackBerry’s four years with Adobe AIR that probably would have made this list had I posted it to this site.