The adoption rate for BlackBerry OS 5.0 continues to be slower than expected. When first looked at one month after release 61% of 9530 users had upgraded to OS 5.0.

Still more than 1 in 4 users have still not updated to the newer OS, and at this point seem unlikely to do so. 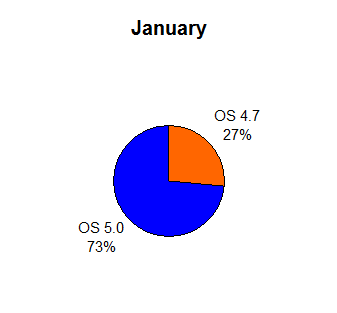 Today Research in Motion showed a preview of their upcoming Webkit based browser which at the end scores a 100/100 on the Acid3 test. Video demo below.

Now it looks as if they have aced the test, and even more importantly is the speed at which it passes. Currently it takes over a minute to get to the full score, the speed in the video is much quicker than that. Overall javascript speed in the browser looks to be much improved, as well as pan/zoom speeds. Overall it looks to be a great improvement coming to the BlackBerry Browser, and hopefully will be released soon.

A few models of the BlackBerry Curve 8330 are now being upgraded to operating system 5.0 which will make them compatible with the Hockey Scores and 10,000 Farkle applications. As this is older hardware, the applications may run a bit slower, but we are still happy to add compatibility for these very popular devices.