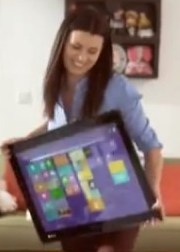 At CES Lenovo has announced that they are planning on launching a 27 inch, 17 pound Windows 8 tablet this summer. At first glance this seems ridiculous, and the product has already received it’s fair share of mockery. But the truth is that it really isn’t that terrible of an idea, at least once you stop thinking of it as a tablet.

The image to the right is from Lenovo’s promo video, and shows how incredibly awkward it would be to carry it around like a traditional tablet. And while I can fit my PlayBook into my pocket, this beast would not even fit into a backpack, and is truly not ‘mobile’ in any sense of the word.

But it doesn’t have to be.

If you consider it less as a tablet, and more as a nice 27″ all-in-one desktop PC that happens to have a touchscreen, then it is actually pretty nice. The Verge recently wrote about how touch screens can be useful on non-tablets, and I think we can eventually expect all screens to support touch. While the $1,700 that Lenovo is asking for is a bit much, prices will come down. In a few years, it probably will not be possible to buy a monitor that doesn’t support touch input.