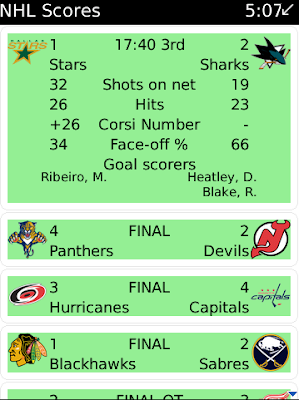 Hockey Scores for Blackberry has been upgraded to version 1.5 for all supported devices, and is now available for free through BlackBerry AppWorld. In addition to resolving the issue the caused the service to temporally go down, a number of new features were added improving the battery life and providing additional game statistics. 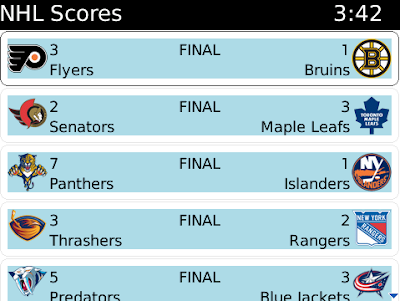 Unlike Hits and Shots on Net, Corsi Number is a bit of a more unknown statistic and could use some additional explanation. In short it is a measure of how much offensive possession a team has. The Corsi Number is named after Buffalo Sabres goaltending coach Jim Corsi who helped popularize the statistic. The Corsi Number is calculated as the differential in shots, including not just shots on net, but also missed shots, and attempts blocked. This can be calculated for either individual players or the for the team as a whole. The Hockey Scores application calculates this for the team, and also displays a “-” rather than any negative Corsi number in order to avoid overstating the difference between the two teams, as technically one team’s Corsi number is always the inverse of the other team’s.

The Peral Flip version of Hockey Scores for the BlackBerry 8220 and 8230 does not display the goal scorers due to limitations in the screen size. All other statistics and options are however included.